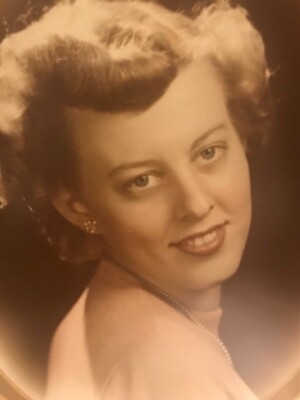 Lolita Lee Roberson Woodward passed away on Sunday, February 7, 2021. She was born in Etowah, Tennessee March 23, 1929 to Lake and Vesta Roberson. Lolita received her education in the Etowah School System and later attended the University of Chattanooga and Carson Newman College. She married James W. Woodward and they had two wonderful children, Deborah Jeane and Terry Lynn. They were Christians and active at all times in the life of their church. While living in Kingsport in the fifties, they were blessed to be two of the nineteen charter members seeking God’s will for a church which grew to a large congregation.
During her life she was active in her church and attended, when able, Woodland Park Baptist for the last 30 years, and was a member of the Bob Merritt Sunday School class. Lolita never met a stranger and had compassion for those in need. Her joys were her family, whom she loved deeply, cooking, and sports. Lolita was employed in the medical field as a bookkeeper and office manager and was active in the ABWA for many years. She retired from Moccasin Bend Hospital after 23 years of service.
She was preceded in death by her parents, husband, sister, Ersa Hollis, brother, WV Roberson, and niece, Tammy Roberson. Lolita is survived by her daughter, Deborah Marsh of Lexington, NC, and son, Terry (Sally) Woodward, of Chattanooga, sister, Vesta Ann Roberson of Hixson, sister-in-law, Linda Roberson of Soddy-Daisy and dog, Ruby, her constant companion. She is also survived by 7 grandchildren: Christy (Michael) Morefield of Lexington, NC, Tara (Jamie) Kayali, of China Grove, NC, Ashley Painter and Jenny Painter of Concord, NC and Michael Painter of Spencer, NC, Sarah (Lee) Napier of Chattanooga, Drew (Beverly) Woodward, of Honolulu as well as 14 great grandchildren, Lauren, Tyler, Emily, Jackson and Carter Morefield of Lexington, NC, Hannah and Lincoln Kayali of China Grove, NC, Owen Painter, Brandon and Addrianna Peralta and Jensen and Lennox Almaraz of Concord, NC and Evelyn and Olivia Woodward of Honolulu, HI and many relatives and friends.
Special thanks to Hospice of Chattanooga and nurse Brenda.

In lieu of flowers memorial contributions may be made to the Cystic Fibrosis Foundation.

Condolences and memories may be shared at www.williamsonandsons.com.
Arrangements are by Williamson and Sons Funeral Home, 8852 Dayton Pike, Soddy Daisy, TN 37379.